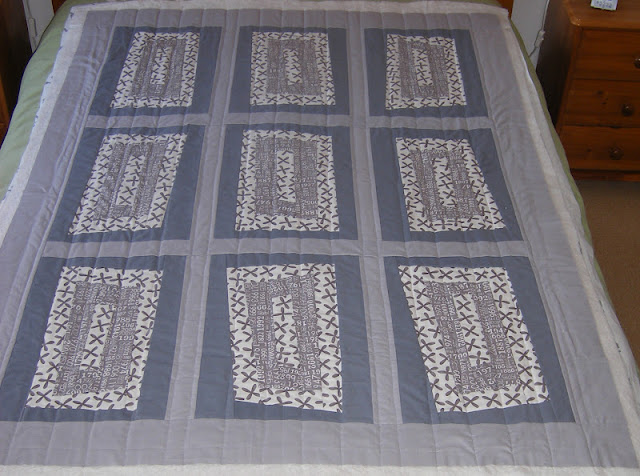 I actually did it - there is wonk where there should be, nice straight blocks and then more (deliberate) wobble on my quilting lines (I believe they are called 'organic' lines by those of you in the know).  I love it!

I know it looks a bit like a dog's dinner in the pic (especially the borders) as I whipped it out of the machine and on to the bed so I could get a snap on here to show you asap.  I can't wait to get it bound now so that I can pass it on to my brother very soon.  Have some lovely Kona charcoal waiting for the binding this weekend.

I also managed to quit the orange/brown/aqua ladder strips quilt which is another gift to be passed on in the next week or two.  Wavy line grid was my quilting pattern of choice on this one.  Not too dense the quilt has a nice soft drape to it. 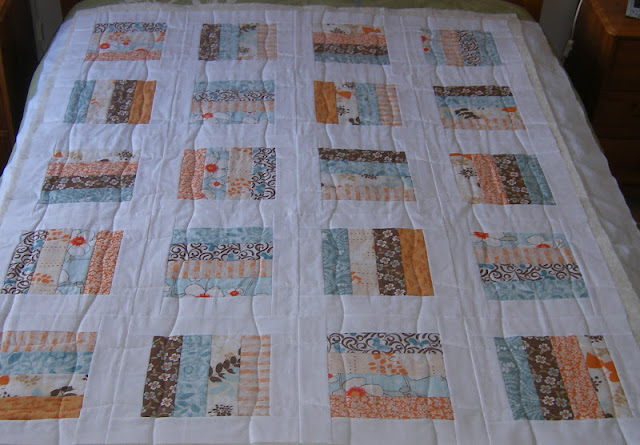 It is destined to have orange binding which I know can be as controversial as brown in some quarters, but I auditioned an aqua/teal colour and just felt it dragged the quilt down surprisingly. I even asked my son to give his impartial opinion and he said straight away to go with the orange because it made the whole quilt look brighter.  So orange it shall be!

Hope to show you both finished before too long.