I didn't really think I'd managed a lot in January until I started to think about this post.

As the year turns and all you other bloggers out there put up your New Year Posts complete with details of the virtual bees you're joining this year, your Quilt-Along projects, classes you are holding and your own wonderful makes it has been soooooooo hard not to become distracted from the plans I had at the beginning of the month.  I have spent far too much time reading blogs rather than sewing but it's just so easy to spend an evening sharing in your creativity and wistfully envying your projects and talents.  I am still waivering on whether to join Little Miss Shabby's Birdie Stitches Quilt-Along and fear my resolve will not hold out much beyond mid-Feb, although of course by then I'll be playing catch up, but hey what's new in my life! 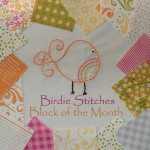 Wouldn't the blocks be easily made up and then the embroidery work could be a great little portable project to take on hols this summer (see, I'm already beginning to justify it to myself)?
Anyway, I have been a little more productive than I thought in January even though I may not have actually completed much except the baby pillow and little bird decoration (both in earlier posts) and the crochet basket from Chickpea Studios.  My hexagon quilt is slowly but surely growing, as I have been basting hexies and stitching granny flowers any time my hands have so much as thought of being idle!  I'm really pleased with how it's coming along.  All that's left to do with the top-piecing is to even up the height and the width (I started working outwards in circular fashion and now it's time to make the height and width more uniform).  Maybe Feb will see that come together ready for layering and binding. 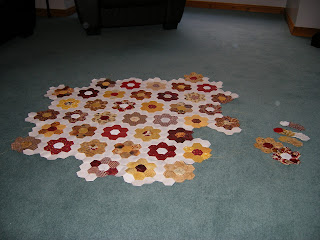 I also managed to pick up an abandoned crochet project which I think I have secretly been hoping would finish itself. Not sure if I just became overwhelmed by the amount of loose ends which needed to be sewn in or if I have actually worked at this so long that I have gone off it.  Perhaps a little of both.  Anyway, I have been weaving loose ends in to the squares and pinning them out to block them ready for the final joining.  There are still a few more to crochet and another few to sew the loose ends in, but at least there has been movement this UFO and it looks like the end isn't too far out of sight.  Can you believe I've been at this so long that they have discontinued the wool colour I had planned to join the afghan squares with?!
Plans for the gift quillow haven't gotten much beyond the sourcing of fabric stage, but I am really delighted with the Denyse Schmidt, Greenfields Hills and can't wait to get cutting very soon.
Of course I've been busy with my class project too and really love how it's all coming together.  Quilting's done just needs zip in and finished off and I'll have a great big cushion to match my own quillow when I'm snuggling up against the cold February weather that's being forecast here. 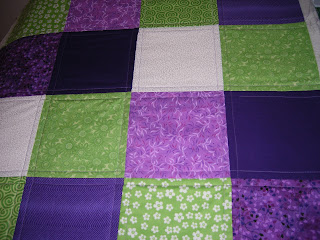 I've even managed a re-think on my Dear Jane aspirations and planned the layout and design for that altered project.  I will blog a bit more when there's a bit of progress worth noting, it's very much a design idea at present.
All in all a good month - here's to keeping up the momentum (and sneaking in a few unexpecteds along the way)!!
Posted by Sarah at 20:09 2 comments:

This week I wanted to do something special for my friend as a little reminder that God's grace is sufficient for us one day at a time.  I know she knows this, but some days a little visual prompt just helps us to hold on to the promises God speaks in our lives.  When I saw this cute little bird on Spool Sewing I thought it would make a lovely little 'thinking of you' gift with the message that God is her peace (dove symbolism). 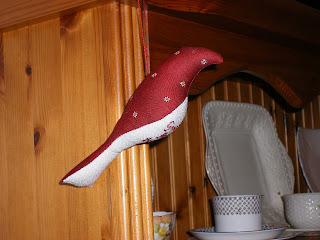 I also embroidered "Grace for today" on his tummy so that when he's hanging in her house where she can see him every morning she can be re-assured that God will provide for her that day and every other one. 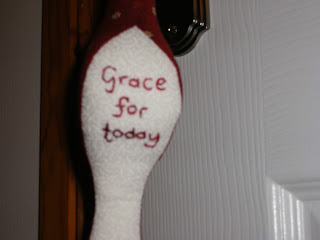 (Sorry about the photos, it was really tricky to get the right picture of this little fella and these are the best of a badly shadowed bunch.)

Being relatively new to regular stitching I haven't yet managed to accumulate the "stash" which will make me a "real" patchworker (chuckle).  Yes, I've recently discovered some long forgotten (like 10 years ago) fabrics which could help me on my way but certainly not enough to become a stash - must be said fabrics have also come a long way in the 10 years since I bought these lost ones (mainly country-esque).  Anyway, with the help of some newly discovered UK fabric websites and the assistance of January sale offers I have the beginnings of a stash happening- look at these....


Some were as little as 75p and 99p a fat quarter, there are even a couple of Moda Verna prints I picked up for 99p/fq and Amy Butler prints at £1.50/fq.  I love a bargain!  Those of you still interested in a January sale bargain should check out M is for Make and Prints to Polka Dots for some fab offers.
Posted by Sarah at 15:48 2 comments:

When I saw Denyse Schmidt's Greenfield Hills collection on sale at fabricworm.com I thought the Blueberry fabrics would work up into the disappearing 9 patch quillow really well (here's hoping I was right).  I have never ordered fabrics from the USA before but took a chance and am really delighted with the result and the price - if only UK pricing could be so good! Although I think my package snuck in under the customs radar which helped keep costs down, too.   I know these fabrics have received a mixed response out there in blogland, but I really loved the blues and think they will be timeless which I hope is the most suitable choice for my quillow recipient. Now I just need some time to get cutting... 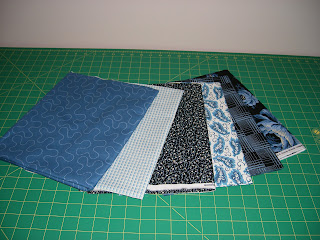 Thought you might like a peek at the floor cushion I'm piecing together at my weekly classes.  Those green and purple fabrics I showed you in previous post are now happily butted into 16 patch squares of 6.5". 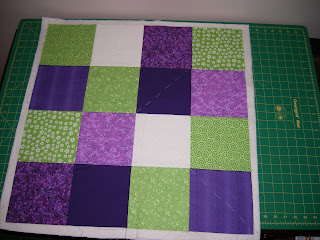 Next week I'm hoping not to make a hash of the visible quilting lines and to fit a discreet zip!
Posted by Sarah at 22:26 No comments:

I'm not quite at the level of being one of those crafters who can whip up a pressie at a few hours notice (I just aspire to be) but I must say I even managed to impress myself last night.  My 9 year old son has a huge and generous heart and when he told me that one of his friends at school has a new baby sister he said he wanted to give something to the newborn - a little girl called Lucy.  I'm a big believer in encouraging generosity in our children and maybe one day his future wife (wherever she may be) will thank me for nurturing this side of his nature!  So, I said we'd think of something and here's what I thought of ... 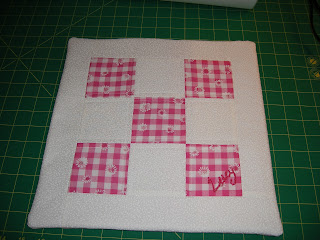 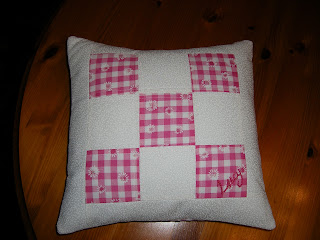 It was a quick stitch - just took one evening.  I know it's fairly simple but I didn't have a pattern so I had to work out all the cutting measurements for myself (I'm definitely learning something).  I have kind of fallen in love with the pink girlieness of it - not often much call for pink and girly in a house where there are 2 very outdoorsy males!  I'll bet some of you could do this beginners' project in minutes few, but nevertheless I am delighted that I was able to carry it off. There were a few desperate moments when I realised the one white fabric I possess was only a smallish piece and I need it for my sewing class which starts tonight.  Some careful calculations and anxious cutting later I managed to eek enough squares for my class project and the squares and log cabin borders for this cushion with just a 4" square left over!  I really will have to add some more whites and simple fabrics to my stash (which is just in it's early days, not like some of you who have fabulous stashes) so that this type of fun gifting project is possible at short notice.  I also greatly appreciated the 69p cushion filler from IKEA that I hadn't used up yet.  It was just 14" square but perfect for a little cushion gift. 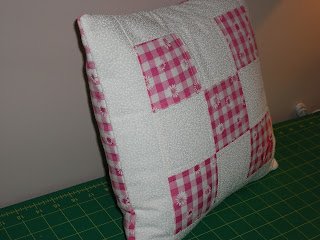 So, pressie wrapped and off to school, I'm now getting really excited to get back to see the "girls" (who are we kidding?) at the sewing class tonight.  See, I'm all ready with my fabrics .... 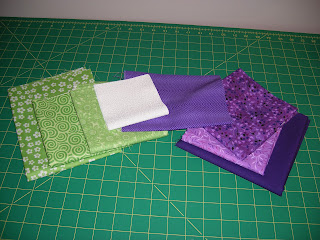 Although I am learning more and more about sewing and patchworking with modern methods which really speed things up, there are times when I just enjoy going back to a little bit of hand sewing and for that hexagons are right up there as my favourite.  Last summer I went through a process of determining that I needed to focus a little more on the past-time (sewing generally, not just hand-sewing) that brings me so much pleasure and satisfaction and that to build it in to the weekly lists of other responsibilities could in fact be truly a benefit to my general and mental well-being.

As an initiator to that I unearthed some fabric I had purchased before my son was born (9 years ago, no less!!), cut out lots of 1" hexagons and set myself up with a little project box to take away on our summer hols to the Lake District.  It was a great way to have a little "me" time while my boys were away mountain-biking and climbing, and was a great beginning to a new project.

I just find that there is something calming, almost therapeutic about stitching by hand and it has the added benefits of being portable and sociable (I can stitch away happily with the family around me rather than being squirreled away on my own where there is enough space to have a machine all set up).

The hexagon quilt is just kind of evolving as I go along, there wasn't much of a plan beyond an idea of some hexie flowers with a calico pathway.  I have learned from making the quillow that the lap quilt kind of size is probably about right for my current skill/ability level so I am now working towards that.  Once I get the body of it sorted I'll have to think how on earth to border and bind it - it all seemed pretty easy when I just started with a few hexagons that I took on holiday last summer!  Still, one step at a time.  Here's how it looks so far ... 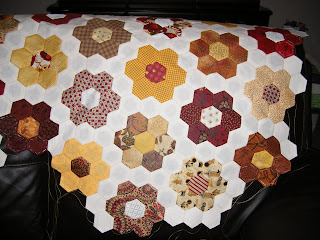 There is still quite a bit of work involved but I'm delighted with how it's shaping up and I love the red, gold, brown and cream colour choices -  not the most modern of fabrics but very warming and cosy looking.  Will let you in on progress as it happens - just don't be holding your breath too hard!
Posted by Sarah at 12:05 3 comments: