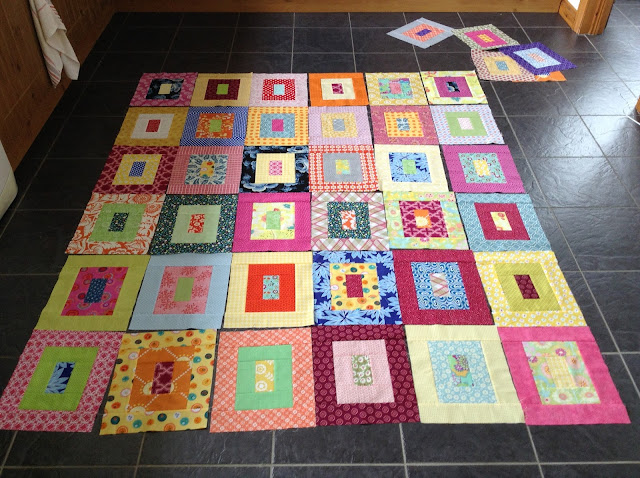 A while back I played with layouts for all the scrappy Frame Box blocks I stitched up as leaders and enders over the winter and spring months.  I spied a double yellow at the top right hand corner just after this pic was taken and did a wee bit of switching and re-arranging before sewing them all together.


In spite of this rubbish photograph, I love the scrappy brightness of this quilt top.  All that yellow makes me smile!! Not too bad for a load of blocks from a scrap box, is it?

Slowly, very slowly, this is becoming a quilt for 2017's Siblings Together collection.  I've got almost a year to get it basted, quilted and bound.  Surely, I can manage that. Please let me manage that! 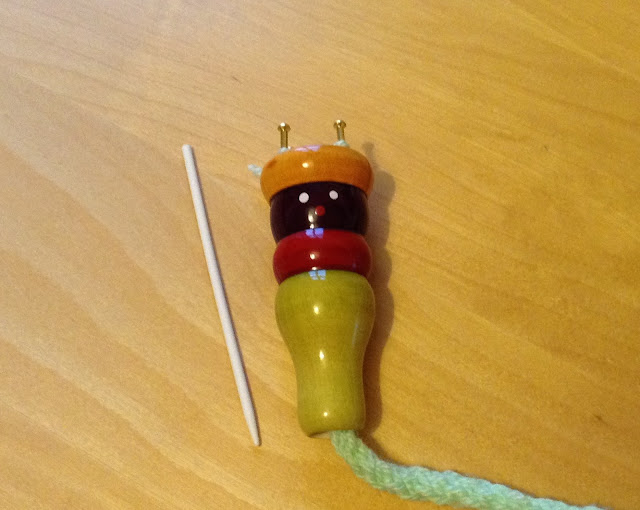 As a child, I LOVED knitting.  I tortured my aunt and my mum to teach me.  If they were knitting, I was rooting around their bags for the small left overs and a pair of short needles. But you know how some things that you didn't get to do/have in childhood kind of stick with you?  Well, for me French knitting is one of those things.  I always found the knitting dolly a mysterious, intriguing item but for some reason I never had one and consequently, I've never tried French knitting until now.  When this wee hooji flashed up in a marketing email recently, I'd hit BUY before I knew it.

So it arrived and well, the mysteries of French knitting were revealed in rather a short time.  Perhaps I'd built this up to be something of an anti-climax? 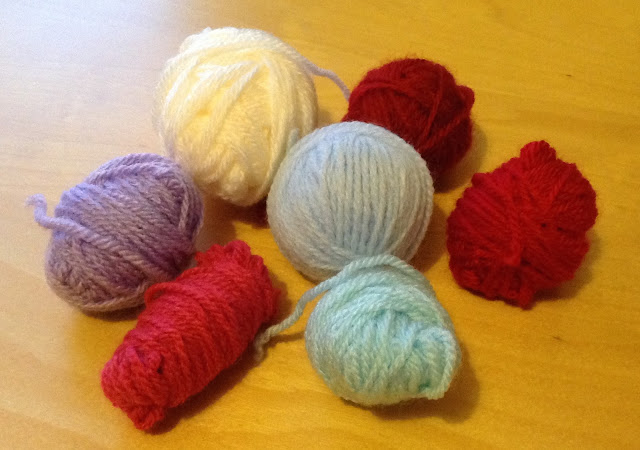 But, fear not!  Thrifty, scrap conscious me hit upon a plan.  I've got lots of small ends of yarn from crochet projects and wondered what would happen if I French knit them all together randomly, and then use the resulting knitted tube as a chunky yarn in its own right for some kind of scrappy crochet throw or floor rug or something.  Maybe that would work? 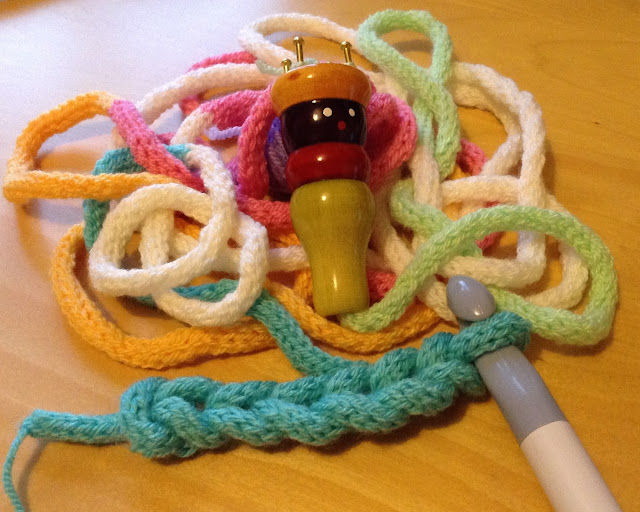 Of course, as my new "yarn" is growing, I can't resist a wee play with my rather large crochet hook - 15mm. 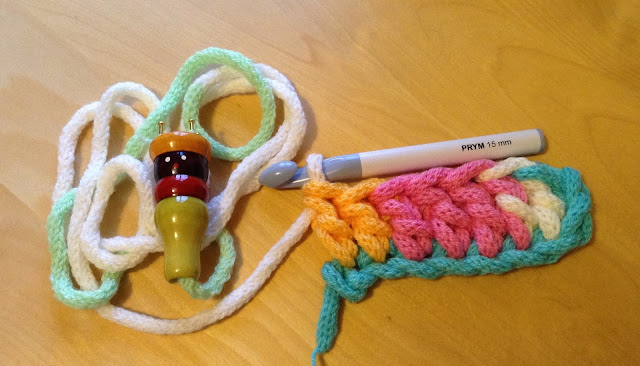 Of course, it'll take a lot of this new tube yarn to make anything, so I may be a while.  Come back in about 8 years and see the first couple of crocheted rounds ;-)

So now I just have a couple of questions. Why is it called French Knitting?   Do the French have a particular penchant for these yarn tubes?  And what did/do people actually do with the tubular knitting that results? Anyone know?

In May, I left you hanging with my unfinished Hawaiian applique block from Month 4 of Sarah Fielke's Happy Days BOM. 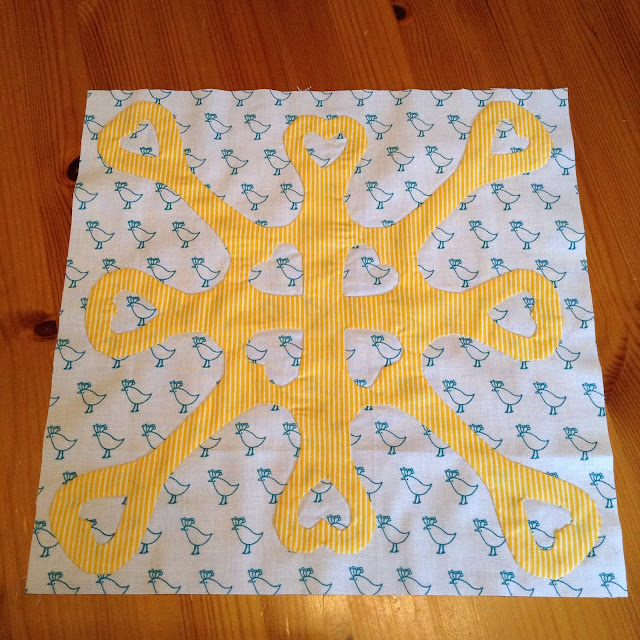 I was very slow sewing this block and there are quite a few angles in them there curves but from a distance it's a passable first effort at Hawaiian appliqué.  Not sure I could ever have the patience for one of those large Hawaiian appliqué quilts but I wouldn't be put off the odd block here and there as it wasn't really as scary as I had thought initially.

In Month 5 Sarah introduced a dresden plate block (Block 6) alongside another appliqué block.  It wasn't my first attempt at a whole dresden circle but it has been my most successful-ish. 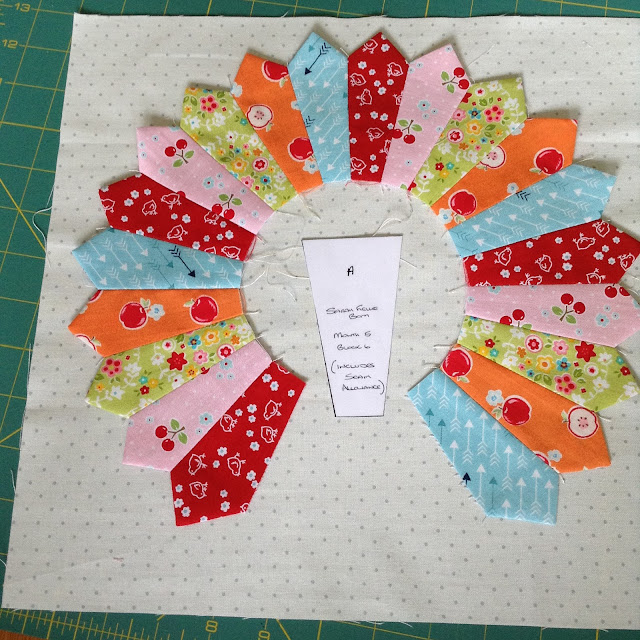 I say -ish because I had a little drama in my making of this block.  When all 20 of my petal were stitched together they didn't quite meet up.  See that gap?  Ahem!  I checked my seam allowances, re-read the pattern, scratched my head and felt my lower lip wobble like Gretel from The Sound of Music.  I had carved out precious time to sew that day and I'd gotten it so horribly wrong!! 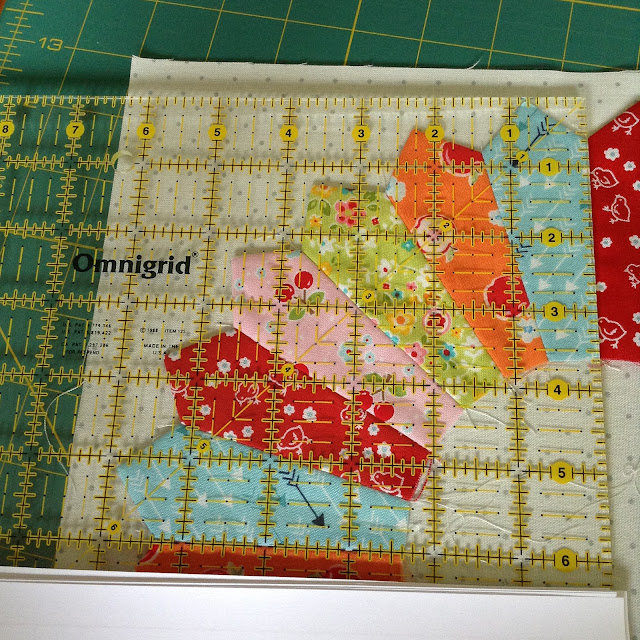 But I stiffened my upper lip and, determined not to have to start again from scratch or to bin this pretty partial circle, I puzzled my puzzler, laid a ruler on top of the dresden-so-far and discovered that although it didn't have the require 5 petals per quarter, 6 petals were fitting a quarter perfectly.  Phew!  Bacon saved or what?! 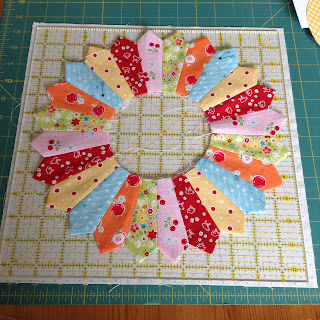 So, I unpicked just enough seams to add in another coloured petal to each quarter (4 in total) and hey presto - one dresden flower, just not as originally intended. 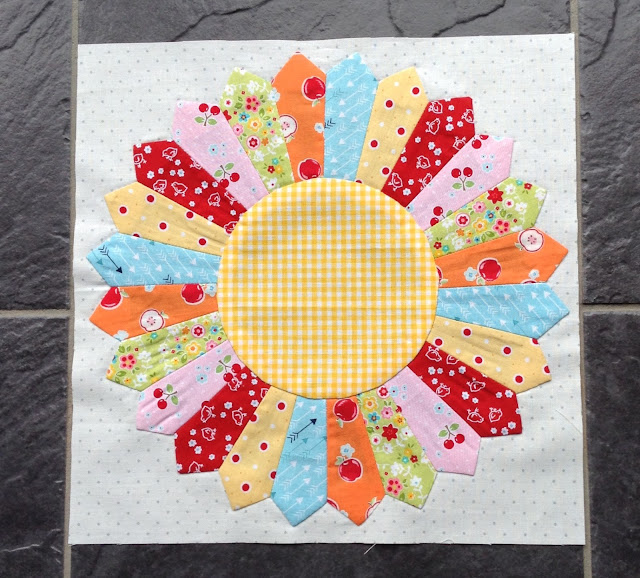 It has 24 petals instead of the regulation 20, they probably result in a bigger flower overall and I had to re-cut my centre circle to fit the new plan.  But hey, I didn't have to waste the afternoon's sewing and my flower petal points will just about survive the quarter inch seam of the block when it's stitched in to the quilt eventually.  Job's a good'un! And, just in case you were wondering, turns out I must not have scaled my templates properly when printing - doh! 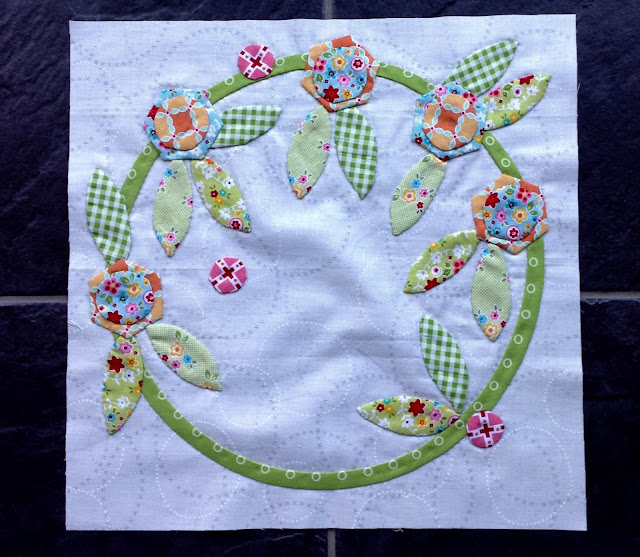 Block 9 is some hexagon flowers on a circular wreath.  All nice and straightforward really.  This photograph makes the fabric choices look a bit washed out, but they are better in real life, honest.  Not sure if choosing those two patterned prints for the flowers was the best decision though.  Maybe they're a bit busy?

Well, that allows me to tick off Month 5's blocks. Months 6 and 7 are waiting in the wings for a little attention - hopefully soon. I really don't want to fall any further behind, especially as I have my eye on some new sew-a-longs coming soon - *cheesy grin*

Spice of Life Crochet Along

You know how it is?  There you are scrolling IG or checking a few blogs and your interest becomes piqued by a hashtag that you notice being repeated and pics of same but different crafty items beginning to take shape.  Next thing you know, you have texted your hubby from the hospital (where you're enjoying a pull-out bed alongside your little one for a long weekend) to bring you a crochet hook and ball of yarn along with the clean vests and nappies he's been charged to bring later on. 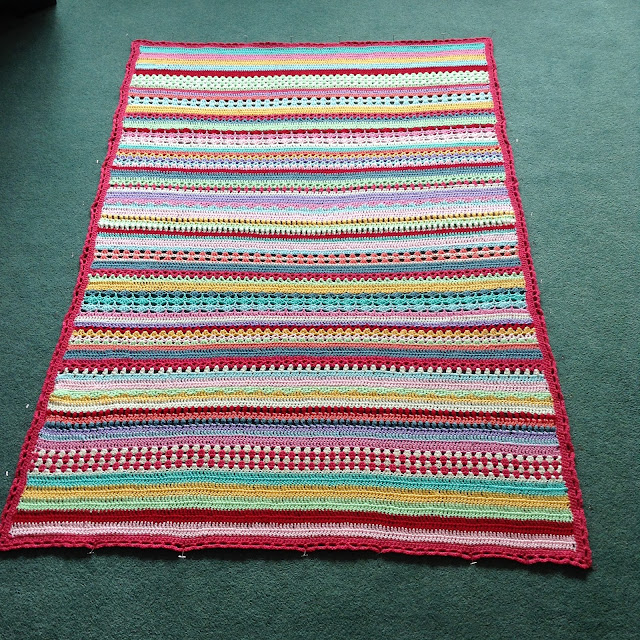 Ok, so maybe that's not your exact experience but I'll bet more than a few of you have been sucked into a new sew-a-long, quilt-a-long, knit-a-long or crochet-a-long just because it looks like fun and your flesh, like mine, is weak to resist.

That's how it was when I spotted the Spice of Life Crochet-A-Long back last autumn.  It was hosted by Black Sheep Wools and designed by Sandra Paul of Cherry Heart Designs.  It said it was suitable for a beginner wanting to progress to the next stage, so I thought it might be simple enough to follow even though my mind has been less than focussed this year. 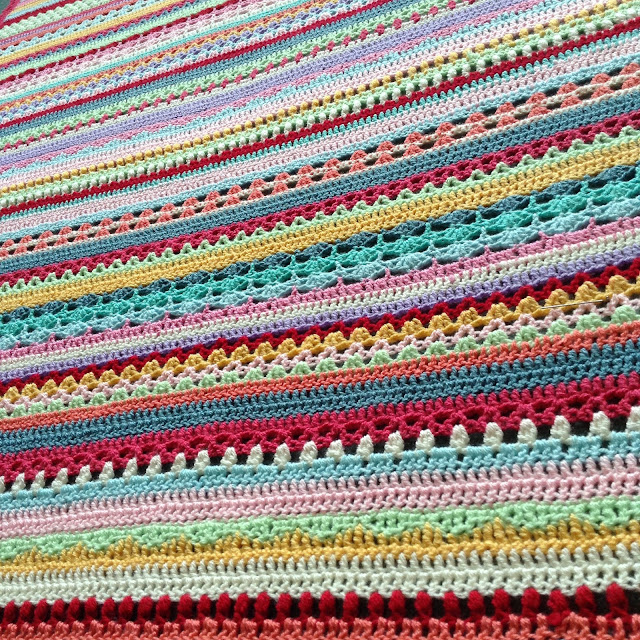 While my blanket is more like a Crochet-A-Bit-Later than a Crochet-A-Long, I'm so delighted with the result.  Truly, if you can crochet a few of the basic stitches and like the look of this blanket, the patterns by Sandra are so nicely written and well supported with photographed stages of the stitches that you really will learn so much and don't need to fear struggling.  The CAL posts are all still available here if you're interested.

My stripy vision of loveliness has been played with by Cutesy Tootsie as it has grown row by row.  I think the colour contrasts of the stripes were of particular interest to her and, of course, she gave it a good squoosh every now and then in her little hands to check for softness.  So, given that she seems to like it so much, it seems only fair that she can lay claim to it.  Here she is with Bella Bear giving it its first snooze test. 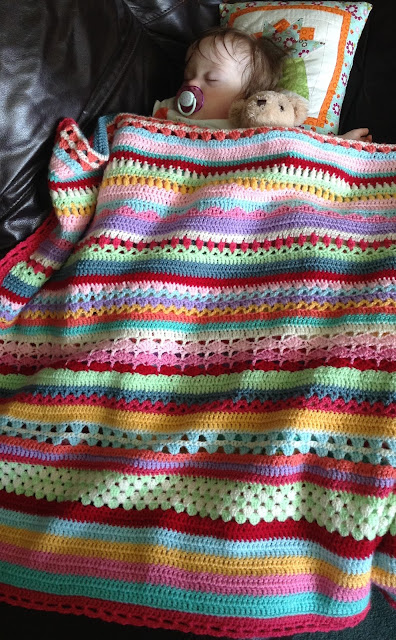 So, confession time.  What A-Longs or BOMs have you been tempted in to when you have a gazillion other things on the go and just because....?

I might have another one (or two) to admit to soon.  Possibly Christmassy and possibly Lori Holt-esque ;-)