Okay, so I know I have all these plans that I should be concentrating on this month, but I have some 'little asides' to show you. 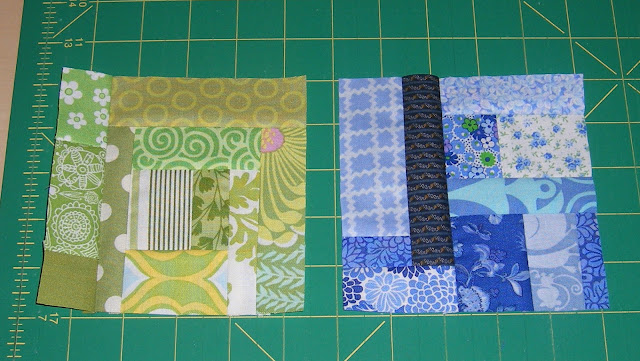 These are 5" crumb blocks made from the odd teeny scraps that find their way into my scrap box.  Following my crazy scrappy block fest at the weekend I was about to ditch some of the little offcuts when I had a mini lightbulb moment.  Some of the little scraps that had already been stitched together and I thought that if I had a few more of them they could be combined randomly into small blocks, turning teeny pieces into usable blocks. So I stitched together a few more and 15 mins later I had a block - easy peasy!

I decided that I wanted to keep my piecing squared, but of course, these could be pieced with all kinds of angles, and wonks if you wanted.  Would it be right to call mine improv without wonkiness?  Or is it all still too ordered for that?

Anyway, alongside my plans to periodically reduce my scraps by making the larger crazy scrappy blocks I think I will throw in a few of these 'little asides' as I go along too.  Of course, it'll take tons of them to make anything from, but there's no rush.