September is my first month in the Modern Stitching Bee and the lovely Leanne set a great block for my initiation month.  I'm not sure if the block she asked for has a name of its own, but it is a block of four quarters - two quarters are quarter square triangle blocks and two are the block which is known variously as Economy, Thrift or sometimes just Square in a Square.

These blocks gave me a great opportunity to break in the new mini design boards which I made just before I went on hols.  You may have seen these on Lori Holt's Bee in my Bonnet blog.  (For ref, I made mine 16.5" which is a bit bigger than Lori's.)  I wondered for a while whether I should make them or is it just another thing that would clutter my space without actually being very useful.  In late July I decided to make 4 and try them out (still have to finish two of them with binding as you can see).  I won't kid you that I wasn't covered in glue during the process.  They aren't difficult, I just got myself into a bit of a gluey mess.  I am glad I persevered though as they came into their own when I was choosing fabrics and sorting the layout for these blocks.  Yes, you are right, I could just have laid them out and played with fabrics on the table but the boards meant I could free up the table for more cutting and prep without disturbing the the arrangement of the blocks.  It also meant that the cut pieces stayed put instead of blowing off the table with every little breeze coming through the window!

Anyway, back to the blocks.  Leanne requested that the Economy block quarters are made up in bright colour prints and, of course, the block design lends itself nicely to a few fussy cut centres.   So, I hunted through my stash and found these which I hope will fit the bill in terms of Leanne's colour requirements.  She did say they didn't have to be matchy.

For the QST portions of the block, Leanne asked for a white solid and a horizontal text print (or another print that reads horizontally dark on white).  I'm not explaining this as well as she did, so just let me show you - 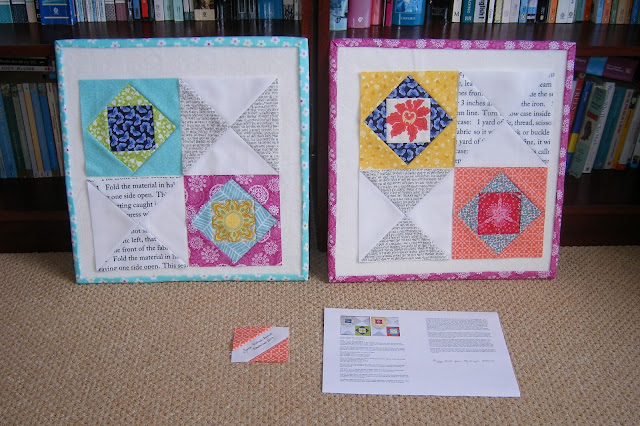 Can you see what I mean now?  (The page on the floor was me checking that I had the orientation and positioning of all the quarters correct before sewing them together!  Attempt to avoid disaster.)

And, here are the finished blocks - 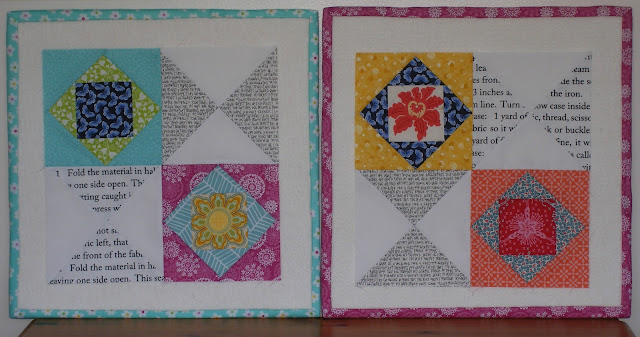 I really think that Leanne is going to have an amazing quilt when all of her blocks come together and you get to see the repetitions of her solids and text prints.  I can't wait to see it!

Hope you like the blocks, Leanne.  Thanks for the fun in month number 1!!

PS  Something is definitely up with my camera.  I'm no Lord Lichfield but even I can usually manage to take pics a wee bit better than some have been the past few days. Definitely a little bit of a blur going on and, today there are funny horizontal lines on the camera screen.  So apols if my pics are inducing mild headaches!
Posted by Sarah at 12:00