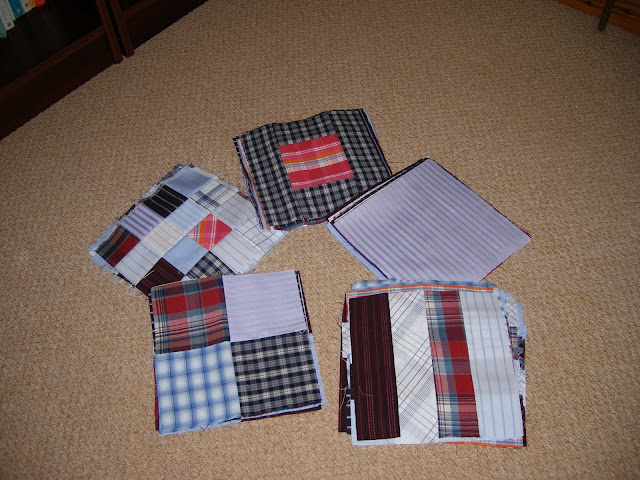 Remember those 88 blocks I made from recycled shirts following the Squares and Strips Pattern? Well, DS and I spent a fun hour a week or so ago laying out all 88 into his quilt design.


Up until now, most of the quilts I have made have been lap quilts of a small/medium size with the largest measuring just 52" x 66".  To me, that was pretty big.  But this humdinger was planned to be for a single bed and is 64" x 88".

To say that I knew in my head the expected measurements of this quilt but hadn't really translated that into quilt on floor space is an understatement, and I am learning lots about big quilts in this process.

I have learned that while moving 20 blocks around for balanced placement can be tricky, 88 is a nightmare!!  DS did join in, scratching his head as he moved one block and learned that it can have a knock-on moving effect on 5 others.  After more head scratching and lots of laughter, we decided it was as good as it would get and checked a quick photo on the laptop to see if anything jumped out at us.  Nope.  Great.  Good to mark up into rows and lay away for joining another time.

Yesterday, "another time" arrived courtesy of some cancelled plans and this little birdie took to the sewing room for some peace and therapy.  There I learned that big quilts aren't therapy, they're endurance tests!  But endure I did, and it was so worth it to see DS's wee face as his quilt top came back downstairs in one piece. 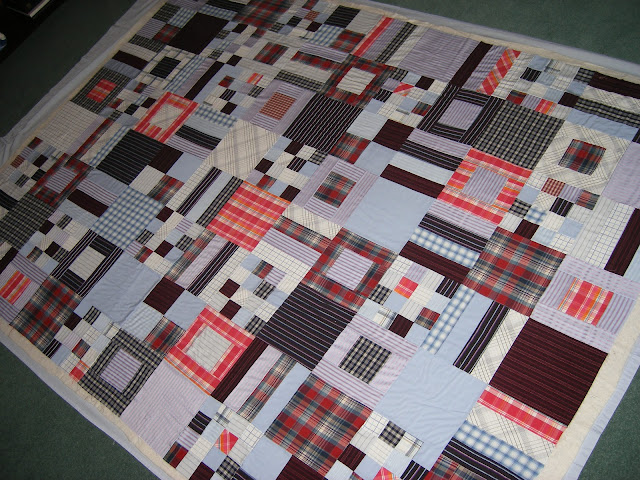 He even helped me baste it and find a backing - I think he's secretly hopeful that I might get on with it faster if he helps where he can!

There then ensued a silent meltdown (so as not to disappoint DS) as I contemplated the 6" throat space of my machine and the acres of this quilt which would need to pass through it.  I began to feel a wiggle coming on. (As in wiggly, wavy line quilting in case you're wondering.)

And so, the third thing I've learned about big quilts is THEY EAT THREAD WHEN QUILTING!!  One and a half spools of thread and this baby is now officially resting on my ironing board until new supplies can be obtained.  How did I not anticipate this?  I only made it to the halfway point, too!  It was such a shame not to be able to keep going and finish the quilting while I was "in the zone", but hopefully I won't have to wait too long to continue the newly named "humdinger" quilt.

All in all very satisfactory progress for an afternoon when I didn't expect to have any sewing time!